History of St. James’ Church and of the Franciscan Friary in Kamnik 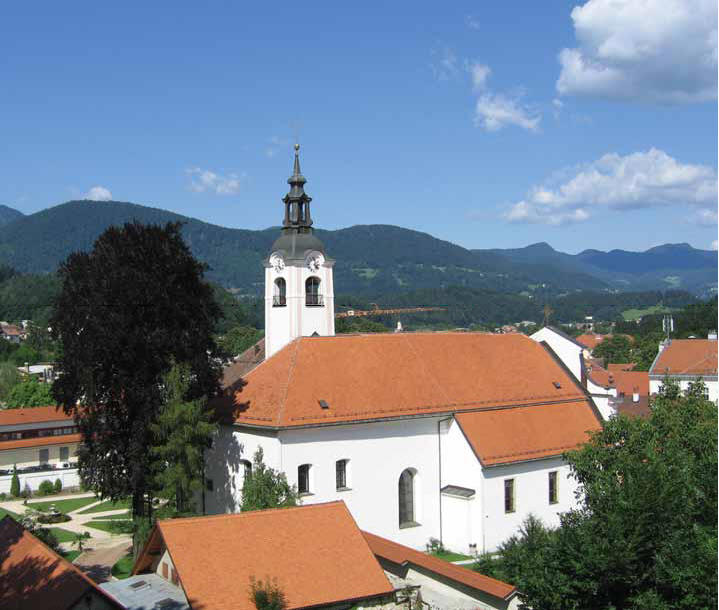 The church or chapel of St James in Kamnik was first mentioned in the sources in 1423. In 1492 Emperor Frederick III gave permission for a friary of Franciscans Observants to be established and built next to the church. The first benefactors of the monastery were the Counts of Thurn, who lived at Stari grad (Old Castle) and were buried in the presbytery of the church. In 1538 the emperor dissolved the monastery because the Lutheran townspeople were not well-disposed towards it and the country people did not like it either since the friars did not speak Slovenian. Nearly 100 years later the emperor re-established the friary. The friary and the church were in a very bad state and had to be restored. On 13April 1695 Jakob Schell Edler von Schellenburg, a benefactor from Ljubljana, commissioned the building of a new church and friary, which were finished in 1703.

At the beginning of the 18th century the Franciscan wood-carving workshop was situated in the monastery. Also important painters (Metzinger, Cebej ...) worked for the friary and the church. Their works are displayed in the gallery in the corridor of the friary.

In the friary the Franciscans had a cloth-making workshop where habits for the whole province were made. There was also a bakery where the poor could get bread. The Franciscans of Kamnik were also well-known for their educational activity. There was a boys’ school in the friary, Franciscans taught at the junior school and a Franciscan grammar school was in Kamnik up to the First World War.

During the Second World War the Franciscans had to leave the friary, which was occupied by the Gestapo, who set up their prison and offices in the building. After the war the Communist authorities took over the building and settled families in it, leaving just a few rooms to the Franciscans. Only in 1991 the last families moved out and the friary became Franciscan property again. A thorough and complete renovation of the monastery began as no regular maintenance had been done since the occupation by the Gestapo. 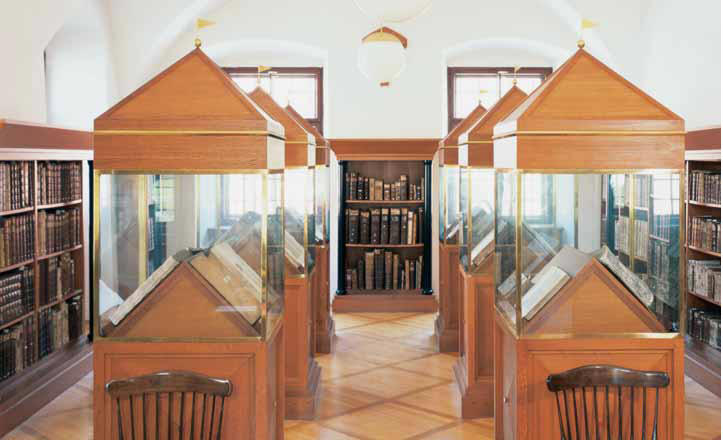 Already in 1492 the Franciscans brought the first books with them, but after the reestablishment of the friary in 1627 they began to collect books in a more systematic way. The library stocks about 10000 volumes. Its museum part, which concludes with the year 1799, is organized according to the catalogue of 1760. The library was organized in a professional manner by Prof. Jaro Dolar.

From the point of view of cultural history, the most valuable part of the stock are incunabula i.e. books printed before 1500. In the library there is also a Slovenian translation of the Pentateuch (= the first five books of the Old Testament authored by Moses) of 1578, translated by the Protestant Jurij Dalmatin, the first Slovenian translator of the Bible. It seems to be a trial work for the translation of the whole Bible, which was published by Dalmatin in Wittenberg in 1584. The Bible specimen in the library is rather special because it contains a preface by Dalmatin, which mostly had to be torn out of the book in the time of Counter-Reformation because otherwise the reading of the book would not have been allowed.

In the library also a part of the books and writings left by the linguist Franciscan Father Stanislav Škrabec is kept. Besides books with religious contents the library also comprises books from many other fields of knowledge the Franciscans of Kamnik were interested in, e.g local history, history, medicine, alchemy, geography etc.

Chapel of the Holy Sepulchre

−1957), who worked much in Kamnik and its environs in the last years of his life. He made the plans for the chapel in 1952 and it was finished two years later. It is full of symbols. The basic idea is a tent, which is indicated by the ceiling with a border in the form of a seam, a typical textile ornament. The ceiling is decorated by the vine, a symbol of Jesus Christ, which concludes with Jesus’ last word on the cross: DOPOLNJENO (DONE). The lights on the walls represent the stars. The tabernacle is made of one piece of stone and represents Jesus Christ’s rock tomb.

The big sun behind it already points to the dawn of the »third day« (resurrection).